JEOL is implementing initiatives to protect the environment through business activities such as reducing greenhouse gases by working to improve energy efficiency.

Through the Energy Saving Committee, the JEOL Group is continuing with initiatives that reduce CO2 emissions to help attain the Sustainable Development Goals (SDGs) and carbon neutrality in the future. 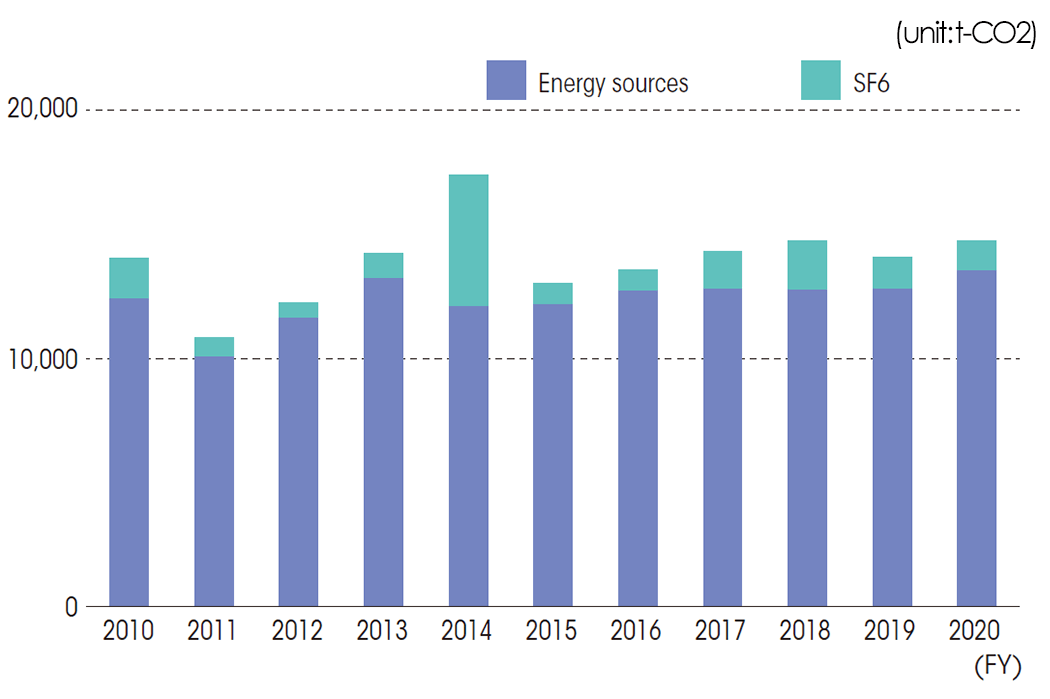 Improving Efficiency of Energy Use

JEOL is working to improve energy efficiency, starting with electricity and fossil fuels. Specific examples of these improvements: upgrading to energy-saving air-conditioning systems; introducing separate air conditioners. Upgrading cleanroom equipment; adopting LED lighting; introducing ice storage air conditioners for more effective nighttime use of electricity; installing light-shielding sheets and films on buildings to reduce the burden on cooling in summer; and using heat-shielding coatings. In July 2020, a solar power system with over 100 kW of generating capacity was installed on the roof of Building 3 at our head office to reduce greenhouse gases (GHGs) as well as to promote clean energy and renewable power. Some of the power generated has been used for production.
Companywide initiatives aimed at reducing energy consumption include Cool Biz and Warm Biz campaigns for office clothing as well as managing the amount of electricity used in every building.
In February 2020, JEOL improved the energy consumption rate (index for measuring efficient use of energy) by 4.2% on average over a five-year period against a target of 1% or more annually on average. This 1% or more target –required by the Act on the Rational Use of Energy and overseen by the Energy Saving Committee—is primarily achieved by conserving energy day to day. We also garnered the highest rank of “S” for energy savings for four consecutive years in a system implemented by the Ministry of Economy, Trade and Industry (METI) that evaluates business every year. Also, we have been recognized for other achievements: the Kanto Region Electricity Usage Rationalization Committee awarded us the top prize for four consecutive years, from fiscal 2015 to 2019, for our effective use of electricity as well as for promoting energy conservation and we received an award for being an excellent energy conservation business from the Kanto Bureau of Economy, Trade and Industry under METI for the first year of the Reiwa era (May 1 to Dec. 31, 2019).
Our energy conservation initiatives were highlighted in the November 2020 issue of Energy Conservation in an essay entitled “Document: Challenge Energy Conservation.” This monthly is published by the Energy Conservation Center, Japan.
For the sixth consecutive year, we also earned an “S” under an evaluation system that ranks businesses that reflect the results of METI’s 2020 periodic assessments. Solar system on roof of Building 3 at the head office